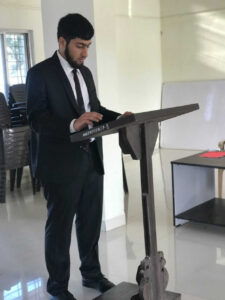 Today telecom industry connects the world, it is easing the trade and market. It is very useful for global business. Many countries have privatized their telecom sector because they would provide better service and would maintain the quality of service. Government has made a body which governs and gives regulatory decision regarding. Telecommunications is the communication of information by electronic means usually over some distance. 1990s was a period of opening up of government for increasing private investment for the telecom sector The Telecom Regulatory Authority of India [1] (TRAI) was set up in 1995 and this minimized the interference of the government in policymaking. The highlighting change that took place was that the Government of India corporatized the operational wing of DoT in the year 2000 and renamed it the Department of Telecom as Bharat Sanchar Nigam Limited (BSNL). In the last 10 years, many private operators’ especially foreign investors successfully entered the high scope Indian telecom market.

Telecom sector in the before Independence period (1850-1946)

The first telecommunication as said was set in Calcutta in the year 1850 which is the oldest in the world. In the year 1881 private companies were given license to open telephone exchange in the city of Bombay, Kolkata, Madras, and Rangoon. There were few subscribers to that telephone. In 1885, The Indian Telegraph Act, 1885, was brought up entitling the Government of India to be the single operator to operate telecommunication services. The Plain Old Telephones’ (POT) services originally run by private companies were taken over by the National Government in 1943 and became a public monopoly.

Independent India got a telecommunication infrastructure with 321 telephone exchanges, 82,985 direct exchange lines, and 537 Public Call Offices (PCOs) from its colonial legacy. Establishment of the Indian Telephone Industry in the year 1948 as a Public Sector Unit and setting up of Telecom Research Center in 1956 at Delhi were important landmarks and significant move in the early stage of growth of the telecommunication sector in India. The first international call of India was been made in the year 1976 between Bombay and London. In the 1980s the telecom industry faced a drastic change and development when it introduced electronics. Earlier telecom was under the watch of post and telegraph department, it was under monopoly till 1984. Then private players were introduced to this market then many facilities were provided such as a wide range of PCOs that were installed and connectivity was given to whole rural areas. During this year the main problem of telecommunication service was inadequate to service and lack of rigidity of policy given by government, some charges which were imposed by the frame workers for the service were one of the highest at that time. Since the year 1991, the Indian market changed its way of approach form a protectionist approach to dynamics, and competition plays a role in deciding economic decisions. A big plan was allocated which ranged from 5% to 6%, provided for the communication sector, after the introduction of reforms in the 1990s. Also, to deal with the shortage of telecom services in the country and scarcity of funds faced by the mandatory monopolists and to facilitate economic growth private sector entry in the provisioning of telecom services was allowed in the whole country.

The monopoly of the state in the case of electronic media itself is a violation of free speech and expression. Section 38 of TRAI Act [2] states that it shall be in the provisions of the Indian Telegraph Act, 1885 [3] and the Indian Wireless Telegraphy Act, 1933 [4] and in particular nothing in this Act shall affect any jurisdiction, powers, and functions required to be exercised or performed by the Telegraph Authority in relation to any area falling within the jurisdiction of such Authority.

FREEDOM OF SPEECH AND EXPRESSION AND THE MEDIA REGULATION

Article 19(2) gives freedom of speech, which has also given specified grounds and can impose a restriction on reasonable grounds, when it comes to the sovereignty of the state, the unity of the state, for the public order. It can impose a restriction. Restrictions can also be imposed through electronic media. Constitutional protection is given to a natural person but no protection is been given to the corporation in this case. The right to participate in broadcasting through television cinema also is considered as part of the freedom of secured by Article 19(1). In Odyssey communications case the Supreme Court held that: “A citizen’s right to exhibit films on television is similar to the right of a citizen to publish his views through any other media such as newspapers, magazines, advertisements, etc.”

In Indira Jaisingh v. Union of India, [6] the Bombay High Court had stated:” The right of freedom of speech and expression has been considered by our courts as including freedom of the press. The right equally covers other forms of media. A citizen cannot enjoy the freedom of speech and expression if he is not permitted to keep his views freely through media even when he is invited to use these media. 281 ‘Telecommunications’ falls under the legislative competence of the Union and not the states 12. Consequently, the legal framework governing the telecommunications sector is within the control of the Union Government and the Parliament. The legal framework governing the telecommunications sector.

This act was to give power to the government to set up telegraph lines in private and public property as well. Telegraph is defined as an apparatus or instrument capable of transmission and reception of giving signals, images writings, or codes. It gave the power to establish telegraphs, grant licenses, and set norms and policies regarding the license. It is also known as the wiretapping clause, as in the interest of national interest and public safety. It also listed punishment.

This act was enacted in the year 1997 whose chairperson had to be a retired justice or sitting justice of the Supreme Court or High Court and a member of high knowledge of this field. The need for it was felt after the entry of private players in this field, which was later replaced by the TRAI act, earlier it was TRAI ordinance. The main motive of TRAI was to regulate provision, recommendation, and tariff. It also adjudicated the matters between the service provider and a big number of consumers.

The chairman and other members are to be appointed by the President, the executive will be appointed as a very expert and knowledgeable person of this field. The primary duty of this act is to organize and conduct public broadcasting, to inform, educate, and to entertain, mainly to maintain balance development of broadcasting. All the complaints regarding any broadcast will be given here, and the organization will the other day inform.

No person shall operate cable unless he has registered under this act. No channel or advertisement shall be broadcast without the prior permission of the prescribed program. Any violation of the act may lead to seizure of whole operator equipment